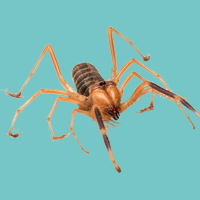 Solpugids often get mistaken for scorpion.  Although this is an arachnid it is neither a scorpion nor spider.  They are 1/2 inch to 1 1/4 inch long.  Light to dark brown in coloring.  Eight legs with an additional set called pedipalps that are used to catch and hold prey.  Another distinguishing feature is the large pincerlike jaws.  It has no tail, stinger or venom glands.

Gradual metamorphosis
The female lays 50-200 eggs after mating into burrows.  She will stand guard protecting her eggs while they develop (about 2 weeks.)  The young solpugids will stay with the mother after hatching at which time she will care and feed for them.  The life span is estimated at one year, with one generation being produced during that time.