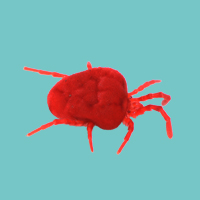 Giant Red Velvet Mites are visible to the naked eye growing to a length of 1/2 inch.  They are covered with red, velvety fine hairs.  They have eight legs.

Incomplete metamorphosis
Eggs are laid and young hatches emerging with six legs rather than eight.  The young will go through a series of molts reaching the adult stage and forming their fourth set of legs.

In India, the oils of the Giant Red Velvet Mite are considered an aphrodisiac, therefore, these are often captured and sold in stores.

Red Velvet Mites do not bite or sting.

Notorious for making multiple nests spread wherever they can settle. Loose bedding though is a common spot for red mites to try and nest.