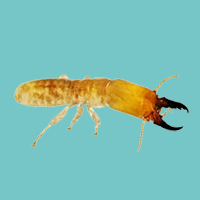 Gradual metamorphosis
Termites are social insects living in colonies with a caste system including reproductives, workers, and soldiers. Termites exchange pheromones to aid in colony communication and determining caste upon need. Completion of caste roles is essential to the survival of a colony. Winged forms leave an existing colony in a large mass. 3% survive and submerge back into the soil to begin developing a new colony. The queen deposits and cares for eggs. As colonies become established, workers forage for food and bring back and feed colony members through trophallaxis. Soldiers guard opening in the gallery and protect colony members from predators like ants. Secondary Reproductives help to care for eggs and egg production when colony mature. Workers make up most of the colony population but have the shortest span of up to 5 years. Queens have the longest life span living up to 25 years. Soldiers make up 2-5% of the colony population.

Termites cause $4 billion in damage per year.

Termite populations can cause severe damage to homes but are not known to bite humans. Essentially termites will bite wood and attack other insects but not people.

Interconnected by a network of underground tunnels.