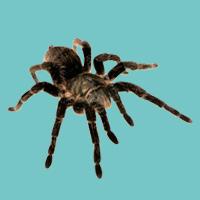 Tarantulas are hairy spiders with 8 legs, 2 body parts, and 8 eyes set close together. They have 2 large fangs under their abdomen. They are reddish-brown, dark brown or black in color. They are 1 to 5 inches in length, have a bald spot on abdomen, and urticating hairs. These hairs are rubbed on to predators for defense, which causes itching and rashes on their victims.

Gradual metamorphosis
Males become sexually mature after several years. They are attracted to females by a scent she leaves on the web surrounding her burrow. Males will perform a courtship dance to attract the female, mating will occur, then the males die a few months later. Females lay eggs in a cocoon within her burrow and she guards the cocoon for 6-9 weeks until 500-1,000 spiderlings hatch. 2-3 weeks later young will leave the burrow. Female stores sperm and will continue fertilization the remainder of her 25 year life span.

There are over 800 species of tarantulas worldwide including the largest spider known: the South American Goliath Bird Eating Spider reaches a body length with legs of up to 12 inches.

Tarantulas will try and bite if you mess with them.