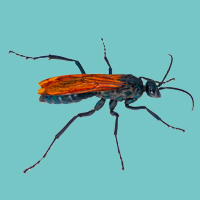 Tarantula Wasp, often called Tarantula Hawk,  are large, black wasps with either black or orange wings.  They have large bodies over 2 inches long.  They have black antennae.

Complete Metamorphosis
The female will hunt for a tarantula spider to serve as food for the larva.  She will sting the spider causing its permanent paralysis.  The spider (if not already inside of its burrow) will be dragged into the hole.  She will lay an egg on the spider and seal the burrow.  The larva will hatch attaching to the spider and sucks out the internal fluid over a period of several months.

Roadrunners are predators of the Tarantula Wasp.

Rarely stings but if provoked it will.

Many times they will not create nests but burrow into the soil of the ground or use existing burrows.