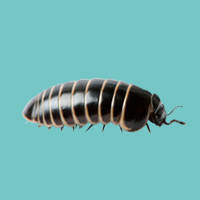 They have a hard exoskeleton, three basic body parts, and are dark gray to white. They have seven pairs of legs and two pairs of antennae. They have appendages at the end of their abdomen called uropods. Females have growths at the base of some legs to hold eggs while they are developing. Breathe through gills since they are isopods. They are commonly known as “roly-polies.”

Complete metamorphosis
The female holds up to 100 eggs in pouches at the base of her legs. Immatures will stay in the pouches after hatching for a few days. They look similar to adult forms. They will molt 4-5 times before becoming sexually mature.

Molting occurs in two stages. The first half sheds then the second half sheds, therefore, the pill bug can be two different colors when this is happening. Pill bugs are known as roly-polies.

They are medically harmless and mainly a nuisance.