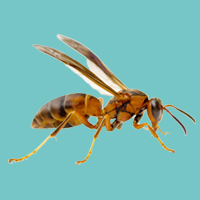 Complete metamorphosis
Workers, queens, and males act to achieve colony survival. Mated females construct aerial nests in the spring. The nest has horizontal tiers of cells in an umbrella-shaped paper-like nest. The most aggressive female lays an egg per cell leaving the remaining female to take over the role of worker.  The queen feeds the larvae when they hatch until they are ready to pupate. The cells are then covered with silk. More female workers emerge and spend the summer tending to the food collection, nest construction, and caring for the queen. Only mated females will live through the winter.

Paper wasps have been attributed to causing many car accidents.  If one is in your car, slowly pull off the road, and open car doors and windows.  DO NOT PANIC!

A wasp sting can cause a life-threatening allergic reaction in some people.

Nests are found in sheltered areas, such as door frames, window sills and the eaves of houses.