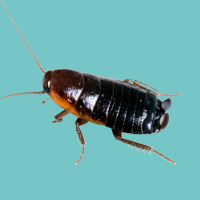 Oriental cockroaches are 1 to 1 1/4 inches long, shiny brown to black color. Females have small, functionless wing pads. Males have wings that cover 3/4 of their abdomen, but they are also unable to fly. Young look similar to adult forms.

Gradual metamorphosis
Females produce eggs carried in an egg case that is attached to their abdomen. After two days of carrying the case, the female will leave it in a hidden area near a food source. The cases (oothecae) are 3/8 inch long, hold about 16 eggs and are brown. Young cockroaches hatch from the case in 6-8 weeks and will be mature in 6-12 months. The young have the same habits as the adult forms. Adults live up to 1 year during which females produce 150 young.

Fossil evidence shows that cockroaches have been on earth for over 300 million years.

A cockroach bite is not something that should be feared because these insects are more likely to run and hide than they are to bite.

Symptoms of oriental infestation usually include:

Dark, damp, cool areas such as those under sinks, under washing machines and in damp basements and floor drains. Outdoors they can be found in water valves, around foundations and crawl spaces.