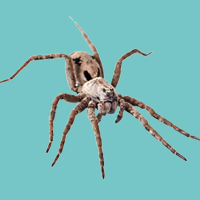 Many species with varying coloring and markings (pictured Garden Orb Spider.)  Females larger than males.  Females are 3/4 to 1 1/8 inches and males are 1/4 to 3/8 inches.  Orb spiders have three claws per foot to handle threads in their intricate webs.  They have an egg shaped abdomen.

Gradual metamorphosis
Males will seek a female during the fall.  Breeding once a year, the female will produce 300-1400 eggs wrapped in one or more egg sacs attached near the center of the web.  The newly hatched spiders will overwinter and become active the next spring.  The male and female often die after mating, but the female can live for several years in warmer climates, however, typical life span is one year.

Orb weavers are considered to be beneficial pests since they eat disease bearing insects like mosquitoes and flies.

Most spiders do not pose a threat to people and are generally helpful by keeping insects in check. However, all spiders do have venom which can be harmful. If a spider bite is suspected fever, nausea, and abdominal pain may also occur, in which case immediate medical attention is needed.