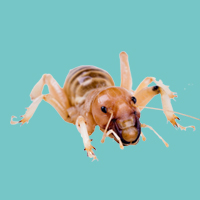 Up to 2 inches long, Jerusalem crickets are most recognized for their large, bald, shiny and curved brown head with two wide set dark eyes.  They have long brown antennae with an abdomen that is black and brown striped.

Gradual metamorphosis
Mating will occur in the spring.  The female will eat the male after they have mated.  She will lay her eggs in small burrows she makes in the soil.  Nymphs and adults are wingless and slow moving.  Development will occur in one year.

Jerusalem crickets have powerful jaws that, if pestered, they will use to bite.  They are not poisonous.

Live mostly underground. If they do reach the surface, they may harbor under rocks or in open grassy pastures. They can also be found and dug out of manure and damp places.