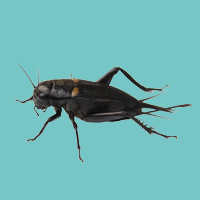 1/2 to 1 1/4 inch long, usually black in color and a thicker body. The hind legs are longer than the front. Males have a sharp ridge on one wing called a scraper, and wrinkles on the other called a file. He rubs these together to make the chirping sound used for mating and to communicate danger. Openings on the front legs serve as ears as crickets sense vibrations.

Gradual metamorphosis
Crickets have a lifespan of one year. They lay eggs in late fall after mating. The female places eggs in soil or cracks and crevices using a tube called an ovipositor. The eggs hatch in the spring when young emerge. The young look similar to adult forms and are capable of walking, running and jumping. The young go through a series of molts before becoming adults. Females go through 9 molts and males through 10. This process takes 65-102 days.

In the Orient, the sound of a singing cricket inside a home is considered a thing of beauty.