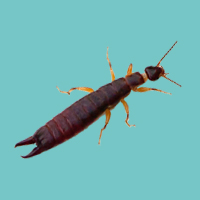 Earwigs are typical insects with three body parts, six legs, and antennae. They can be winged or wingless and are 1/4 to 1/2 inch long. Their narrow, elongated bodies are brown to reddish brown. Some species squirt an odorous liquid for defense, which can be smelled if squished by humans. Cerci extending from the abdomen are forcep-like. This feature often intimidates people fearing they will be pinched, but in reality, the pinchers are unable to penetrate skin. The pinchers are larger and more curved in the males, they are used for a defensive and offensive weapon, and can be used to capture prey.

If picked up and agitated, the earwig will use its pincers.

Usually they will seek shelter under sidewalks or along dirt alongside the foundation of a property.