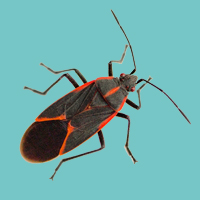 Gradual Metamorphosis
After overwintering, the females and males will feed for about two weeks prior to mating.  The female will then lay eggs in cracks and crevices in the tree bark.  The nymphs that hatch are bright red and will complete 5 molts (instars) prior to reaching the adult stage which takes about 60 days.  The adults will have fully developed wing pads and wings.  Two generations will occur from spring to fall.

Boxelders will fly as far as 2 miles from their original harborage point.

They are nuisance pests. They do not sting or transmit disease and are generally not known to bite, though there are rare reports of defensive biting.